Where Does It All Lead? 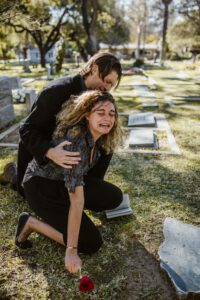 Over the past few weeks, I’ve been meditating on the topic of grief.  My heart has been heavy with the fate of those kids in Texas… who will never again collect fireflies.  Never go off jumps on their bikes.  Never catch snowflakes on their tongues in that rare Texas snowstorm.  Never graduate.  An excruciating darkness has arisen following the snuffing out of all those bright flames. That this tragedy is not rare, but rather part of a pattern, makes even more abhorrent.  The ongoing slaughter of Americans by Americans, in a way, makes barbarians of us all.

We are going to have to get good at grief.  In the coming decades, much will be lost.  Things will likely get worse, maybe much worse, before they get better.

We’ve got a good start on “worse.”  Today’s young people are the first American generation to face a less prosperous outlook than their parents.  The prevalence of homicide and also suicide, along with widespread addiction and depression, signals a crisis of meaning that’s impossible to ignore.

Our democracy hangs by a thread with voting rights under assault.  And our economic picture is shadowed by unconscionable inequities of wealth.  Jamie Dimon, of JP Morgan Chase, is as much a beneficiary of those inequities as anyone… and Dimon said in early June that an “economic hurricane” was brewing. 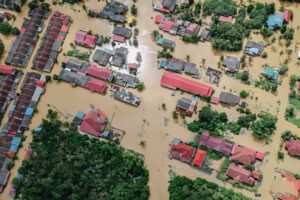 Meanwhile, the spike in people losing homes to floods, fires, and other climate disasters has just begun.  (Not to mention the nonhuman species that are suffering even more than we are… and who don’t get federal bailouts!)  The ecosystems that support us are going haywire with toxics, habitat loss, and climate impacts.

Our social fabric is coming apart too.  The dominant social media environment that profits from polarization, self-destructive behaviors, and groupthink – the historian David Courtwright named it “limbic capitalism” –  undermines the healthy social discourse that is the basis of civil society.

As all this is happening, the first existential threat humans discovered – nuclear warheads – are not only still around, but still a very real threat. We have to get good at grief not just for ourselves but because vast numbers of citizens will suffer losses, and will then also need our best healing efforts. 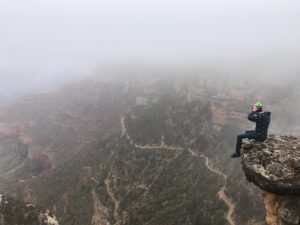 With all these problems added to our cart, what will checkout look like?

We are at the edge of a global meta-crisis.  Imagine being on a physical edge – the edge of a cliff.  You haven’t fallen.  You are solid… for now.  But you REALLY need to keep your act together to stay safe and sane.  In this meta-crisis, the juxtaposition between apparent normalcy and increasingly ominous signs of collapse creates a sort of energy field vibrating with threat and opportunity.  Not unlike what you’d feel on the edge of a cliff.  And most people aren’t even tuned in.  They’re on some other channel, or absorbed in their Facebook feed, or perfecting their golf swing.

We have to face what is happening

As the neuroanthropologist Jamie Wheal likes to say, “the hour is late and the stakes are high.” 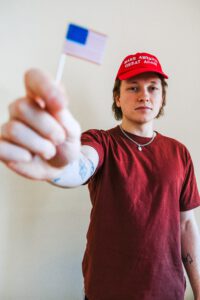 Wheal also suggests that while tribalism is destiny, humanism is optional.  What I think he means by this is that we are wired by evolution to join with those most like us and hunker down in opposition to others.  Our inner circle may be political allies, folks from our church, fellow Seahawks fans, whatever.  Tribalism is rising both on the left and right sides of our political spectrum and it is amplified by perceived external threats.  At the same time, our grand experiment of human civilization requires working constructively within a larger, multiethnic, diverse population toward common goals.  We’re learning that humanism is a fragile construct that may not survive the current era.  On the plus side, education opens us up to broader, more inclusive understandings.  On the minus side is limbic capitalism, the Facebook-fueled rise of antagonistic groups completely uninterested in dialog or diversity.

Faced with a global meta-crisis, it is easier to not deal than to deal.  The popular options for not dealing are denialism… and nihilism.

Denialism sticks with business-as-usual.  Denialism is hard to justify in the face of mounting evidence.  Yet, increasingly, people seem willing to discard evidence entirely.  Denialism has also given rise to the popular idea that we shouldn’t worry because technology will somehow magically save us.  It’s a place of false comfort occupied by those who think, for example, that climate change is no big deal.  Denialism also is found in the belief that transitioning to a new energy economy doesn’t risk significant suffering. 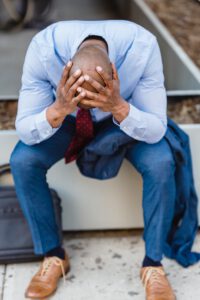 Nihilism is for those who haven’t given up their connection with reality, but seeing the harsh facts of reality, have just… given up.  This might be easier to defend than denialism, but it still leaves us helpless and hopeless.  Nihilism acknowledges worst-case scenarios… but then rationalizes apathy and inaction.  Why bother working for change if all our efforts are doomed?

Both positions can be used to rationalize inaction.  Each of us tends to lean one way or the other – as an optimist, I am prone to positive interpretations which can at times border on denial.  But by supporting inaction, both positions fail the ultimate test, which is:

How do we apply our creativity and courage to make the world more habitable and humane?

That’s the vital question.  But it includes other questions:  Am I willing to make significant changes in my lifestyle and priorities for the greater good?  How can I make the biggest difference?  And what is the burning creative passion that can keep me going when discouragement is delivered, free, to your doorstep by the end of the business day?

The constructive path, the path of healing, requires four things of us. 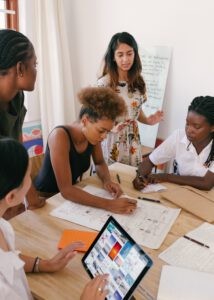 The first is effective collaboration.  Consider again:  tribalism is destiny, humanism is optional.  The business leader Simon Sinek described a window into mutuality in his book The Infinite Game.  The Finite Game underlies the sports industry and is found on both the right and left sides of politics where people play win-lose.  Think tribalism.  The Finite Game has been featured lately in the Johnny Depp-Amber Heard trial.  The Infinite Game, on the other hand is played to keep differences in check well enough to sustain the game itself.  Think humanism.  Much of what we value, from workplace harmony to functioning democracy, represents the Infinite Game.  To the extent we can disengage from playing win-lose, there’s hope for us to achieve a common purpose.  Prioritizing caring and fairness will optimize our chances in our necessarily collective future.  We’ve had a good run of rugged American autonomy that has made munitions a higher priority than children:  Time for something new.

The second I’ve already mentioned:  effective grieving.  We need to feel our feelings deeply, neither suppressing them nor getting absorbed by them to the point of becoming debilitated.  I believe that accessing our soul force, our creative and constructive capacity, can metabolize grief by turning it into something that allows forward movement.  The pain is still there, but we can shift it in new directions buy tapping into our creative power.

Applying creativity to grief is not a new idea.  When my brother suddenly died as a teenager, our neighbors all came over with huge plates of food, channeling their feelings into constructive action. As a 12-year-old who just lost his brother, what solace I could find was in making little cards for everyone saying “amas” –  “love” in Latin.  In the same vein, my amazingly creative partner Lisa made a beautiful quilt for a friend who lost her husband.  Embracing grief does not mean getting stuck or ignoring our pain.  It means creatively moving within and through our pain together. 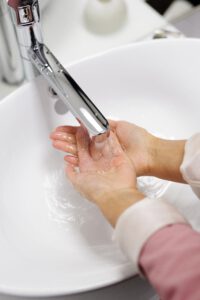 The third approach is effective discernment.  By discernment I mean using awareness and analysis to keep ourselves on track.

Back in the 1840’s a young obstetrician named Ignaz Semmelweis had the idea that if doctors washed their hands with antiseptic between patients, they might reduce maternal and infant mortality.  It was a revolutionary idea at the time, and – surprise! – it worked!  Mortality on his ward plummeted!  Unfortunately though, other doctors took offense at the idea that a gentleman’s hands could spread disease.  And despite Semmelweis’s abundant evidence of success, he could not explain his results since germ theory hadn’t been invented yet.  Semmelweis eventually proved such a threat to the status quo that he was forced by his peers into an asylum where he was beaten and eventually died.

Today, everyone is familiar with hand sanitizing.  (Maybe too much so!)  But few are familiar with the Semmelweis Reflex:  The tendency to reject new knowledge because it conflicts with preexisting beliefs and biases.  This is where discernment comes in.  We have to be radically open to new information, especially when it conflicts with what we already know.  Yet we have to be critically, not naively, open, lest we get sucked into conspiracies and become wackos.  We’ve got plenty of wackos already. 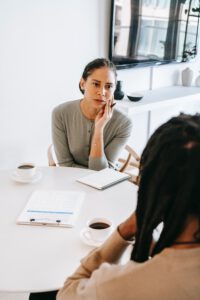 Being critically open ties in with the idea of “lifelong learning.”  If lifelong learning is meaningful, we’re not simply talking about taking a tennis class in your 30’s or a painting class when you retire.  My master’s thesis focused on integrating transactional learning – which changes what you know – with transformational learning – which changes who you are.  Lifelong learning in the 21st Century needs to address transformation:  Renewing our worldviews. Building our ability to compassionately listen.  Expanding our creative frontiers.  It is critical that we commit to continued personal evolution.  Doing so requires the intellectual agility of discernment.

Where does it all lead?

Effective Collaboration.  Effective Grief.  Effective Discernment.  The final approach we need, to thread our way between denialism and nihilism, is effective choicemaking.  Action.  We grieve with our hearts.  We discern from our minds.  And we act with our bodies and souls.

Choicemaking is where the rubber meets the road.  Effective choicemaking will make us not victims of the present, but builders of the future.  But in a meta-crisis, where to next?  Thanks to collaboration we know we’re not alone.  Thanks to grief we can access creative responses to suffering that give us the resilience to hang in there.  Thanks to discernment we know that, while we’re not omni-powerful, motivated humans working together can and do make change happen.  So what choices will best serve both our wounded world and our human need for joy along the way? 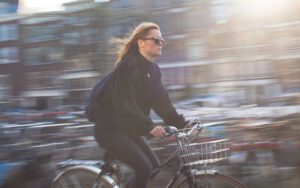 This is really the key question facing humanity at this existential crossroads.  Our choice of action is so important that it warrants its own essay.  So I will leave you to ponder this point – but I don’t leave you alone.

Talk about it with your family and friends.  Meditate upon it.  Have dreams.  Comment on this post if you are willing; along with many other readers, I would love to hear your thoughts.  And in coming weeks I will take this inquiry forward into exploring action — how we can make the world more habitable and humane.

As always, your comments are greatly appreciated.  And if you are up for getting an email notice when these infrequent but interesting essays get posted, please subscribe.  We will respect your privacy and send only minimal messages.

(** A version of this essay was delivered in June 2022 as a keynote talk at the Explorations Academy graduation ceremony.)