It’s common to think about teenagers in terms of struggle. Indeed, adolescence is a time in which a certain turmoil – social, hormonal, familial, relational, identity-related – is inextricably part of the experience. When young people have strong role models and strong coping skills, this turmoil may only be turbulent water through which they cruise, with a few bumps, into adulthood. 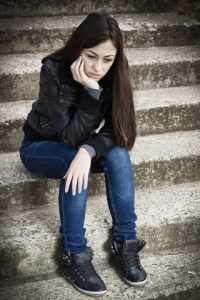 But strong coping skills are by no means a given, even for a well-adjusted young person with a supportive and healthy family. For the most part, such coping skills are NOT taught in school. And of course many kids don’t have strong role models for handling the difficulties that are part of their route to maturity.

One result is high levels of adolescent depression. Depending on the study, the rate of youth depression ranges from 10 to 20%, with higher numbers among females. And suicide is listed by the website Suicide.org as the third most common cause of death in the age group 15-24. But even for youth who are healthy, difficulties around self esteem, positive peer relationships, family interactions, and body image are common. What helps kids deal with these difficulties?

As the founder and leader of a high school that did intentionally teach coping skills, one of my goals was to help young people see that they, and their peers, were able to change. At the outset of every term, I encouraged students to give themselves the permission to be different people, and to be open to seeing others in a new light.  When a teenager truly understands that identities change, that relationships evolve, and that even parents can grow, then the turbulence of youth is placed in a healthy context.

A new study is out that underscores the power that understanding has to reduce stress and improve the quality of life. As described in a recent New York Times article, the study design first introduced the idea that personalities are not fixed but can change. Students then read short pieces by older kids describing how they worked through emotionally conflicting situations. And finally, they were asked to write up some advice they might give to younger students about dealing with difficulties.

This study was beautifully designed. It first presented a lesson rooted in concrete information, which helped kids feel that they were respected and being treated as intellectuals. It went on to offer corroborating information from older peers, adding the authenticity of other teens’ voices. And it closed by putting participants in a leadership role, which called them to be at their best.

All the elements of the study are ones that I, along with a few key colleagues, developed over the years in our experiential school. They took somewhat different forms in our program, but like this study, they yielded very clear positive results.

If you haven’t read the NYT article (or perhaps the original research report), I recommend doing so. And let’s continue to find ways to help our young people gain the ability to change themselves and move past confining self-definitions. One way to do that is to be an adult who demonstrates the ability to change!