Renewables: the ONLY economical form of energy? 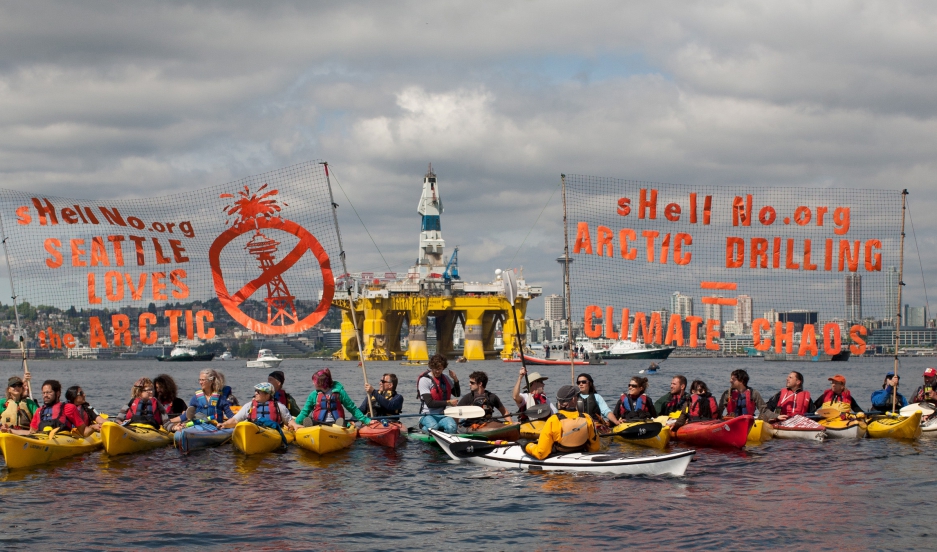 For everyone working to stop pipelines, coal terminals, tar sands development, and oil tankers: There is excellent news emerging.

A series of studies released in recent months points to a distinct and unmistakable pattern: Renewable energy is not only here to stay, it is — right now, in 2017 — becoming more cost effective than fossil fuels. This striking truth is in direct contrast to petroleum industry projections, which have consistently underestimated the growth in renewable energy market share.

In October, the financial advisory and asset-management firm Lazard, Inc. released its annual survey of energy costs. This in-depth analysis does not focus upon individual energy bills; rather, Lazard deals with the energy market from the perspective of investors. Consequently, their key metric captures the cost of energy produced by a given project over its entire lifetime of service. This metric is called LCOE – the Levelized Cost of Energy.

Lazard’s new report shows that the LCOE of renewable energy projects, specifically wind and utility-scale solar, has dropped below that of coal and gas fired power plants, and is far lower than nuclear energy. 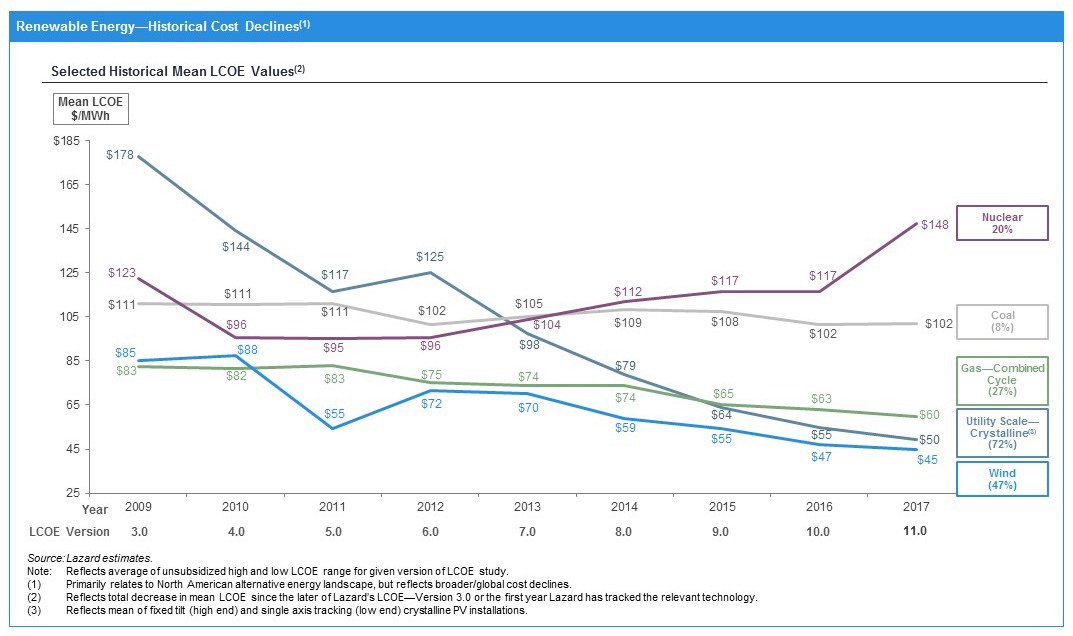 This graph from Lazard shows nuclear’s LCOE coming in at three times that of solar and wind.

Lazard’s analysis continues: “As LCOE values for alternative energy technologies continue to decline, in some scenarios the full-lifecycle costs of building and operating renewables-based projects have dropped below the operating costs alone of conventional generation technologies such as coal or nuclear. This is expected to lead to ongoing and significant deployment of alternative energy capacity.”

Investors calculate the time and expense of deploying new energy sources. This is where LCOE comes in: it determines return on investment. The wording of the above statement, “…in some scenarios the full-lifecycle costs of building and operating renewables…have dropped below operating costs alone of conventional…” shows that new renewable generation is becoming a better investment than running existing dirty systems. Follow the money: smart investors, right now, are turning away from fossil fuel development. It just doesn’t pencil out any more. 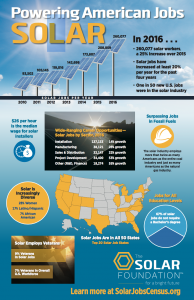 Another recent report was the 2016 National Solar Jobs Census, put out by the Solar Foundation. This study tracks changes in one sector (solar) of the renewable energy workforce. The study revealed that solar jobs in the USA jumped 25% from 2015 to 2016, continuing a trend of 20+% job growth per year. Such numbers don’t reflect renewable energy costs, but show that solar’s market share continues to build rapidly. And consider this: solar energy in 2016 employed more than twice as many Americans as the entire coal industry.   This is not a blip caused by government subsidies. It is a powerful and irreversible trend.

Government subsidies have, however, played a major role in developing clean energy. Germany launched a subsidy program called Energiewende in 2002 that helped push the percentage of green electricity in that country from 9 to 32 percent in a dozen years. Such a foresighted government initiative has an impact well beyond its own borders: Energiewende helped drive down the cost of wind and solar technology worldwide.

(The US, of course, invests far more in subsidizing fossil fuel research and production than in renewables, despite the hue and cry about solar subsidies.)

Another benefit to the transition to renewable energy (the literal meaning of Energiewende) is the democratization of power. Instead of huge utilities controlling massive power production facilities, renewables lend themselves to decentralized applications that can be owned and managed by  families, local governments, small businesses, and Public Utility Districts.   That doesn’t mean that the big boys aren’t vying to control new energy sources. They certainly are, even as their capital is tied up in an imminently obsolete industry. But it suggests that new energy sources might trigger a new landscape of energy production. 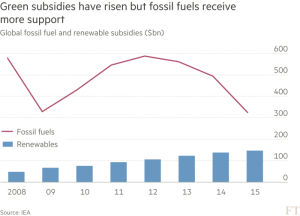 We’re still burning gas in our cars, coal in power plants, and natural gas in our stoves, and will be for a while yet. Government incentives for fossil fuel production continue. And the trendlines, positive as they are, don’t yet allow us to disengage from decades of dirty power.   But change is upon us.

And it is accelerating. A third study, this one released in the past month by Bloomberg New Energy Finance, shows that electric car sales jumped 63% between the third quarter of 2016 and the same period this year. The jump is led by China, where the government is pushing electric cars to address air pollution (and make the government look better).   Nonetheless, a record high of 350,000 electric cars were sold in the past quarter across the globe, and Bloomberg estimates that total sales in 2017 will exceed 1 million.

Evidence from other market players reinforces the electric vehicle boom. Volvo has declared its intent to move to an all-electric fleet.  Tesla is introducing electric transport trucks.  Over 29% of new vehicles sold in Norway last year were electric.  These facts show that clean technologies are hot, and that forethoughtful leaders aren’t waiting around for change – they are making it happen.

(Also worth noting: every electric car sold, assuming they are charged from a clean energy source, will be emissions-free throughout their entire lifespan.)

Even allowing for a Chinese thumb on the scales of the electric car market, numbers like those above indicate that renewable energy technologies are coming into their own. As vast as is the fossil fuel industry’s infrastructure, its future is deteriorating. Ultimately it will not be competitive with clean energy.

And “ultimately” is looking closer and closer. At the point when renewables become cheaper than fossil fuels, it won’t matter if a given investor has an environmental bias — the tipping point is here.  Jonathan Mir, another Lazard analyst, asserted: “Energy industry participants remain confident in the future of renewables.” If financial analysts and energy experts are agreed on this transformation, we cannot doubt that pipeline protests, coal terminal permit battles, and oil tanker expansions will soon be history.

In the words of Irish energy entrepreneur Eddie O’Connor, “Fossil fuels have lost. The rest of the world just doesn’t know it yet.”

Activists just have to keep the pressure on until the economy strikes the fatal blow. 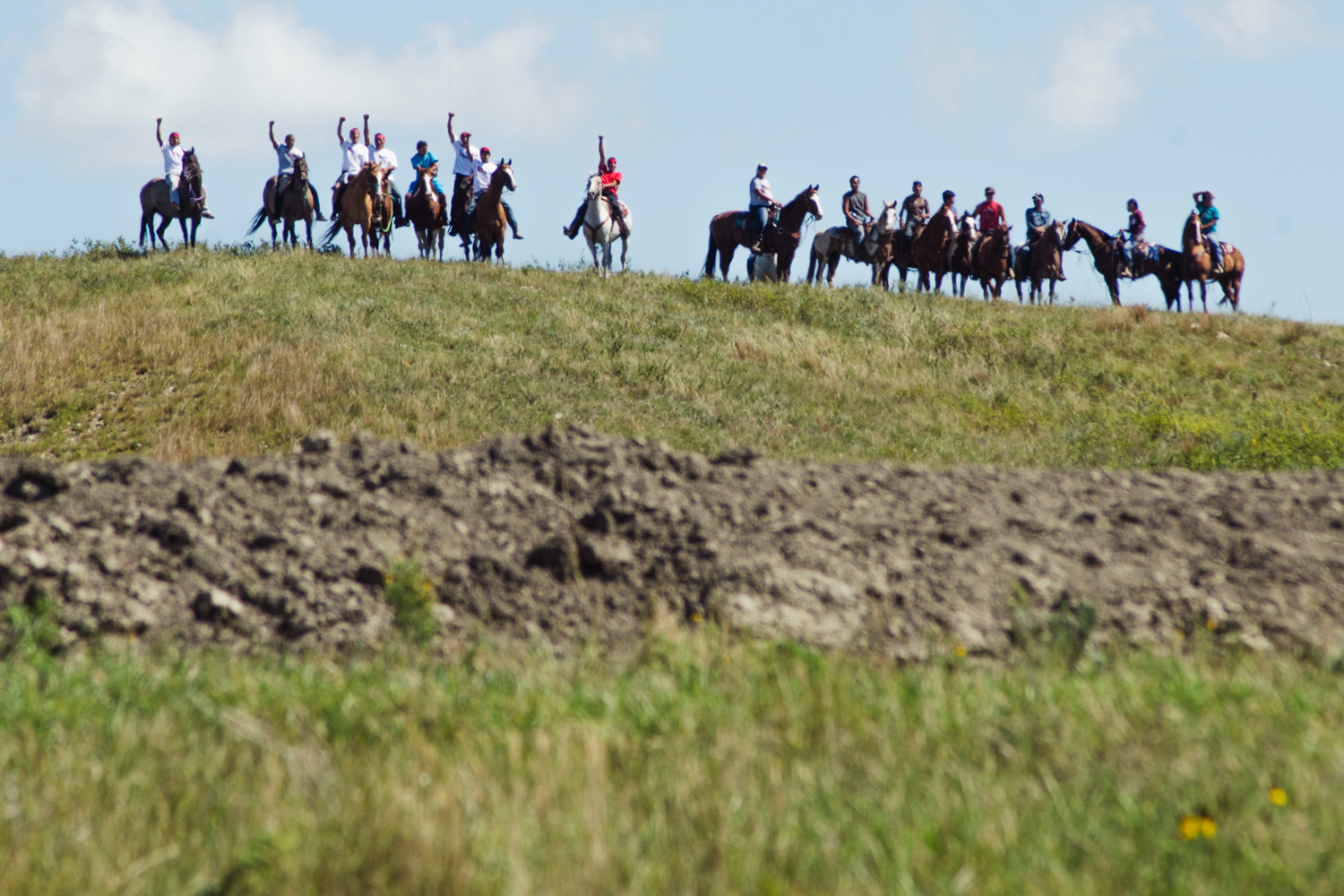 Native American protectors standing up against the Dakota Access pipeline.