Getting to Know Bali 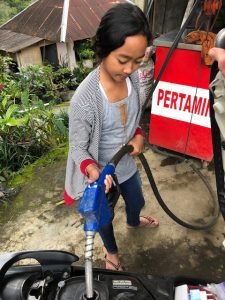 Getting gas in a mountain village

The girl pumping gas into our scooter couldn’t have been more than 10 or 11 years old, but she had a wonderful warm smile. And she actually pumped the gas using a hand-crank pump on a tiny stand that might have been made in the 1940’s. Nonetheless, we bought our two liters of fuel and headed off again, zipping up and down the backroads that lace through the foothills and gorges of the Tabanan District of Bali.

Scooters are THE way Balinese get around. While there certainly are some private cars, the roadways primarily carry scooters that dodge around buses and cargo trucks like motorized insects. It would have been great if we’d been able to explore the countryside without using petrol. But scooters are remarkably efficient and human scale: On a three day weekend adventure, circumnavigating the volcano Gurung Batu Karu, driving enough hours to ensure a numb posterior, we burned just five liters of fuel!

And the array of uses for scooters nearly boggles the mind. We saw miniature grocery stores mounted on the back of scooters, knife shops, ice cream wagons, baskets of chickens going to market, fruit sellers, five gallon water jugs, families of four (or more), barbecued chicken stands – you name it, it can be put on a scooter.

Of course, nobody visits Bali for the transportation. The real magic of Bali, gorgeous scenery notwithstanding, is the incredibly gracious and kind Balinese. 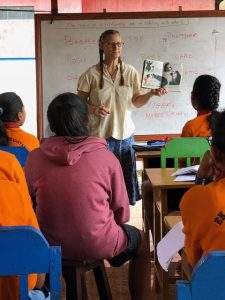 Lisa and I came to make a connection with the culture of this island beyond that of tourists; tourists are, in essence, just specialized consumers. We wanted to contribute to this island culture in some small way. That’s what led us to the Yayasan Eka Chita Pradnyan Learning Center in the tiny village of Samsaman. Here, Ibu Ketut Sunarmi has established a program to help children learn English, to increase their understanding of the world and perhaps also to increase their future economic opportunities.   The translation of the Learning Center’s name comes out something like “One Purpose for Learning.”

At the Center, we are responsible for helping about 60 children, aged 10-15, develop their English skills. This is an after-school program, optional for kids and free to the families. Individual sponsors, chiefly European, along with some NGO funding, make the program accessible. (It is worth keeping in mind that the average household income in Indonesia is under $150/week.) 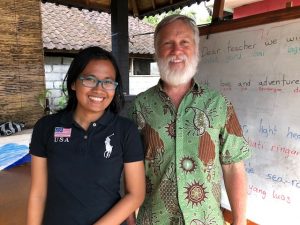 The day of our presentation about the USA, Intan showed up wearing a USA T-shirt and I with a Balian print shirt!

Because the Learning Center is an enrichment program, it does not follow a rigorously structured program or curriculum. And the program’s only teacher, a bright and capable young woman named Intan Rastini, proved to be very receptive to our ideas and suggestions for strengthening the curriculum. She was grateful for the lesson plans we developed, gladly accepted theme ideas to link lessons together, and earnestly explored classroom management techniques with us in our frequent conversations. 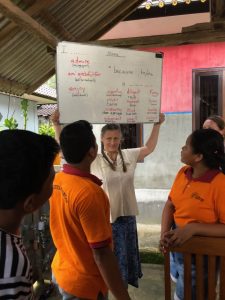 At some point it is helpful to simply have extra adults around to help in the classroom, and we anticipated that we would be playing support roles, akin to classroom aides in the USA. We rapidly discovered, however, that we were to be the lead teachers whenever we were present. This was perhaps because Intan wanted to learn from us as much as possible, or maybe because having us in that role offered a greater level of cultural exposure to the students. But by halfway through our first day, we were taking the lead in the classroom!

Once this dynamic became clear, we set about doing more thoughtful lesson planning. We developed lessons around the lunar eclipse, which took place our third day at the Center; US geography and demographics (most volunteers are from Europe or Asia); and human relations, since Intan identified “Family and Friends” as the theme for the month of February. We also taught a couple of songs. And, being who we are, we worked to make our classes as experiential and engaging as we could. This made our class sessions well-received by both the kids, who like to be active and moving, and Intan, who has apparently had little exposure to experiential education. Overall, we had a ton of fun, got to know a bunch of delightful kids, and enjoyed a very warm collegial relationship with Intan. 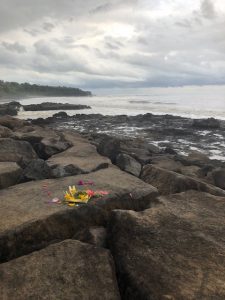 A Hindu offering basket left at the edge of the ocean 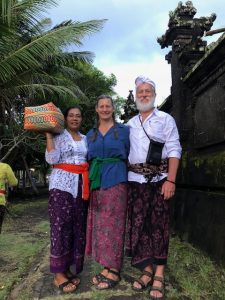 Photography inside the temple wasn’t cool but after worship we took a photo with Ketut.

A major advantage of our placement at a Learning Center in a small village was exposure to locals.  On various walks, we encountered numerous villagers, who without exception were kind and curious.  Our hosts, Ibu Ketut Sunarmi and her husband Made were very kind in including us in community events.  When we learned of a major Hindu ceremony coming up, and expressed curiosity, we were invited to join Ketut and Made at the temple.  This proved to be quite a fascinating experience, involving ceremonial clothing, flowers, incense, offerings, chanting, and more.  We actually attended three prayers in three adjacent temples, one of which was directly on the shoreline.  Offerings had been placed along the path to the temple, and it was a lovely evening to be an honorary Hindu.  I will return to the subject of faith in a later post, but it was a true blessing to get to be part of the ceremony. 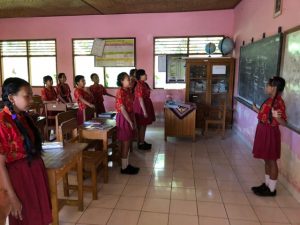 One of the Samsaman students led her class until the teacher arrived.

One of the days we were in Samsaman Village we went to see the local school that many of the Learning Center students attend. There, we visited an English class that was taught by a very nice man who admittedly was not skilled at English. Intan accompanied us to serve as a translator, which was a great help; it also netted her a job offer! Just as at the school we visited in Borneo, we were struck by an apparent commitment to have Indonesian kids learn English… contrasted with limited teacher strength and workbooks that are themselves rife with poor grammar.

The kids, however, were wonderful. A good number of the kids in the class are also Learning Center kids, so they had a clear interest in furthering their English as well as a sizeable skill advantage. But all the kids were incredibly composed, thoughtful, polite, and self-reliant. For example, we’d been talking with the teacher in the office at the start of class, and all entered a few minutes late. The students – these were 11-12 year olds – had already begun their class, taking attendance themselves and starting the Indonesian national anthem. Our interactions with kids at the Learning Center all took place in an atmosphere of mutual respect. The kids got squirrely at times, like all kids. But my sense is that in any American classroom, their behavior would be considered absolutely exemplary. 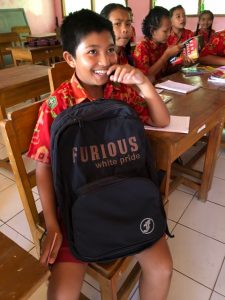 One worries about the influence of American culture…

Which of course raises the question of “Why?” Is it because they are from a lower-income society and thus see more clearly the benefits of education? Is it because the fabric of families is largely intact here, with households typically including extended families of multiple generations? Is it because the penetration of media and technology is so much less prevalent than in our culture back in the USA? I have not yet delved deeply enough into Indonesia to answer this. But it was certainly a delight to work with such kids. 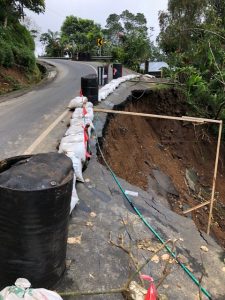 Apparently this is a common sight in the rainy season.

Our stay in Samsaman encompassed a three-day weekend. Lisa and I seized the opportunity to take our rented scooter for a jaunt up into the mountain district. As I mentioned, we burned very little fuel despite traveling many miles up and down steep mountain roads. These roads were narrow and winding, with numerous switchbacks and phenomenal views. This being the rainy season, it proved to be quite an adventure to dodge the many washouts, where dozens of meters of roadway had simply disappeared down the mountainside. We observed “safety cones” composed of tripods of palm fronds, truckloads of rock fill being unloaded by hand, and road workers sweltering in the process of moving multiple cubic yards of soil, shovel by shovel. On one road, we were turned back by locals who informed us that the road had been completely washed away. 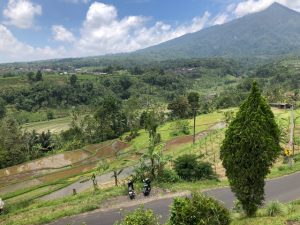 Hard to imagine getting tired of a view like this.

For much of the time we were exploring, the mountains were either wrapped in mist or completely obscured by cloud. But vistas did open up, and they were amazing. The mountain town of Munduk got quite a bit of rain during our stay there. But when the clouds parted, one could see for dozens of miles across rice fields and lowlands, all the way out to the gleaming line of Bali’s north coast.

Beyond exploring backroads and simply viewing the mountains away from tourist centers, our highlight was visiting temples and hiking with an ecotour guide. We saw a good bit of native jungle, including spectacular strangler fig trees and wild ginger blossoms. And the water temples – some, like Pura Hulun Danu Tamblingan, over ten centuries old – were amazing structures to see. Another temple, Pura Endek, was intriguing in that it included both Hindu and Buddhist worship structures within the temple grounds. 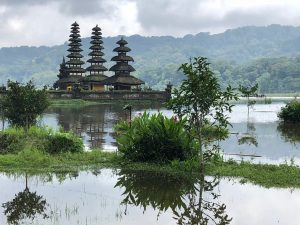 We sought to wind our way back to Samsaman Village using as many byways as possible, primarily to avoid the dense traffic of the main highway. This proved to be a delightful undertaking. We saw verdant rice terraces seemingly on every slope of the Batu Karu volcano, met delightfully friendly people in all the small towns where we asked haltingly for directions, and saw innumerable tiny villages where people stared at us: Most of this countryside just isn’t a tourist magnet, so a white couple zipping by on a scooter is an oddity. And some of the roads weren’t on either our National Geographic paper map or Google’s digital map. At one point we even encountered a dam and sizeable reservoir that eluded both sets of cartographers! That led us to a ramble down unpaved roads and trails between rice paddies, but it all worked out.

And that is something that is a remarkable feature of Bali: Things work out. 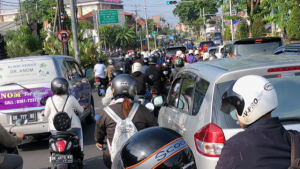 The concept of “lanes” is not the same in Bali as in the USA.

Case in point: The traffic scene in Balinese cities is by American standards outrageous. There are thousands of scooters, they don’t seem to be bound by any sort of traffic laws, and they are extremely maneuverable. The result is that they flow like water around trucks and buses. (Of course drivers stay to the left in Indonesia, an artifact of Dutch occupation before the Netherlands became a right-hand driving country.) But the amazing thing is that the Balinese bring a certain cultured deference to their manic streets. Over and over again, we’d see thick traffic sort of magically stop to let someone turn left, or slow down to allow someone to pull out into the stream of traffic. It was as if a huge overflow crowd came to a temple to see the Dalai Lama, but the attendees were so patient and at peace that everyone smoothly and neatly filed into the place. Bali’s streets are manic, packed full, and intense, yet the underlying social order – or perhaps the simple graciousness of the people – ensures that somehow, everyone’s needs get met.

It makes being here a joy. 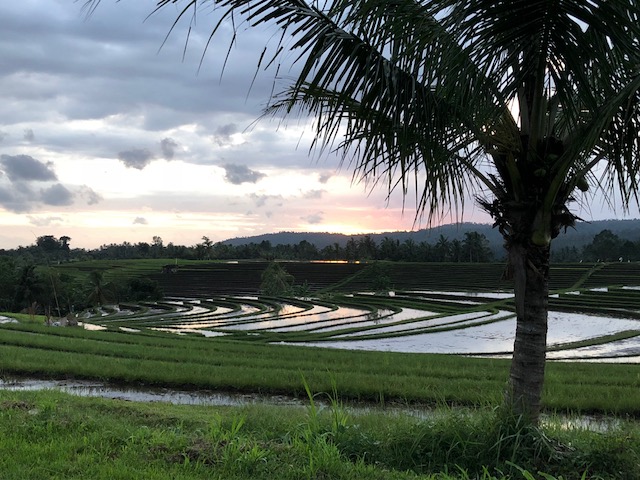