A Visit to Borneo

Note: A change of scenery is often conducive to learning. The next few posts will contain stories and images of the author and his partner Lisa’s sojourn in Indonesia. The trip is largely educational and ‘re-creational,’ though we also hope to contribute, however modestly, to the people and ecosystems of the world’s fourth-most populous country. 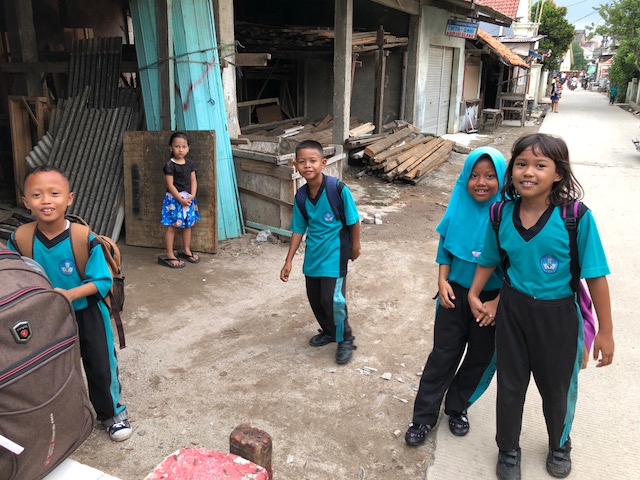 Although it was not at all intentional, it comes as no surprise that two of the first words I looked up after setting foot in Indonesia were “learning” and “school.” The first of those was on the drive in from the airport, trying to communicate with a driver who had very little English. I did my best (while my first glimpses of Jakarta whizzed by) to look up words in Bahasa Indonesia to aid our communication. “Learning” (belejar) was part of my effort to tell him I was trying to connect. Later, meandering through a neighborhood, a clutch of young kids attached themselves to me, staring me unabashedly up and down. Their unfettered and good-natured curiosity was a joy to see, and I wanted to take our contact further. In looking up and saying “school,” (sekolah) while gesturing at the nearby edifice, they lit up even further with fascination with the oddity I represented. Quite fun energy! 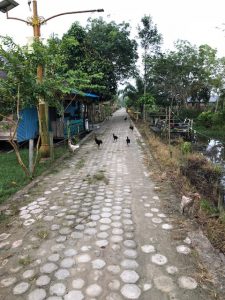 One of Harapan Village’s main streets

We spent a night in Jakarta before our early flight to Borneo.  Jakarta had been warm. Pangkalan Bun was stifling. What felt like a wall of heat and humidity hit us as we got off the plane. We met our guide Adut and rode with him to Kumai in an air conditioned taxi, then loaded into a breezy speedboat that took us up the Sekonyer River. But arriving in Harapan Village, the heat and humidity again washed over us, and stayed. 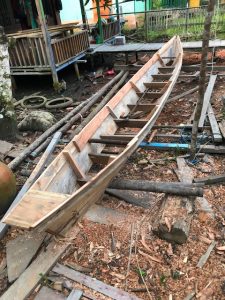 The village is a quite pleasant community of a couple hundred souls. There are two streets, one of which is wide enough for two lanes, but is too rough to be passable by most cars. Canals used for boating, laundry, dishwashing, and personal hygiene paralleled both. The “street” Mr. Hata, our homestay host, lives on, is about four meters wide, suitable for the ubiquitous scooters that are the village’s primary transportation. Cows, dogs, chickens, and the occasional cat also used the path.  The comings and goings of people in the town always seemed to include a smile and a Selamat Pagi! (“Good morning!”) The wooden houses sit on stilts to keep them off the marshy ground, and could be considered rustic – though a few sported satellite dishes and televisions used when the town’s generator was fired up between 6pm and midnight. 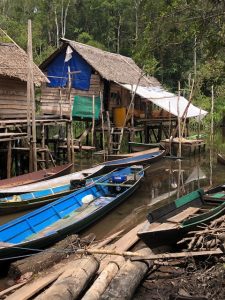 A traditional home with canoes and aukuns moored

Of course the original means of transit for these villagers, mostly of the Dyak people but including some Malay, was the river that feeds the canals of the town. Canoes sit in front of most houses, and the larger aukun boats, powered by small strong engines, cruised up and down the river all day. Sometimes the aukuns had to dodge klotoks, two story liveabord boats used by the many ecotourists visiting the area. 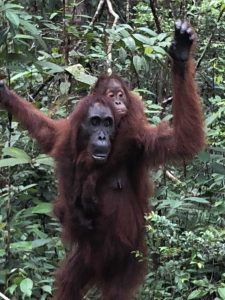 It’s hard not to feel an affinity for the orangs!

What draws those tourists, and what also in part drew us, is primate observation. The adjacent national park, Tanjung Puting, is one of few remaining places orangutans have undisturbed habitat, which makes it a great place to see these delightful beings. The park is also a place where orangs rescued from poachers or from incarceration as pets have been released. In keeping with the historical practice of rehabilitation, feeding stations have been established in the park and are still used today. The reliability of seeing mostly-wild orangs who come to the feeding stations for a free meal has driven a huge ecotourism industry. At one feeding site we saw over 50 people jockeying for position to watch and photograph two orangs. It’s rather weird, and likely not in the wild primates’ best interest. But it does expose people to the animals, and there is perhaps an environmental lesson in simply seeing them in the jungle. 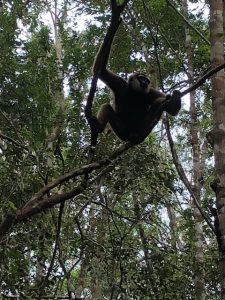 An uncommon sighting of a gibbon

Thanks in large part to our excellent Native guide, and to residing directly in the village, we enjoyed a greater exposure to the wild primates. Adut’s rich knowledge of the area and of natural history came to the fore as we cruised the river in his aukun and saw orangs in the jungle, far from the feeding sites. We watched endemic proboscis monkeys, who sleep in the tree canopy adjacent to the river. This habit reduces the angles from which predators can approach, and makes the proboscis most visible at dawn and dusk. Often we observed troupes of long-tailed macaques, speedily and gracefully swinging and scampering and jumping through the trees. On one occasion we saw a gibbon, and on another we were able to watch a small group of langur monkeys with their grey bodies, black faces, and extremely long tails. 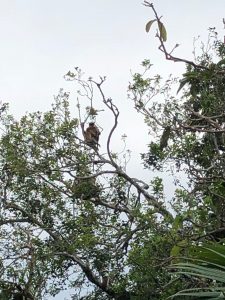 Monkeys are not particularly subtle. Their scamperings along branches and graceful leaps from tree to tree create substantial movement and noise. Seeing them directly is a somewhat different story: picking out a small primate high overhead in silhouette is easier said than done. The orangs are even less subtle than monkeys as they are larger, move more slowly, and create even more noise – but they are easier to see. Traveling by river optimizes primate viewing, since the river slices through the tree canopy, creating openings that favor the observer.

At one point I witnessed a fight between macaques. Whether it was between two troupes or a struggle for dominance within one troupe I could not tell, but the roars, barks, and screeches were amazingly loud and came in association with an immense amount of shaking in the tree canopy. There is something very magnetic about watching wild primate behavior! 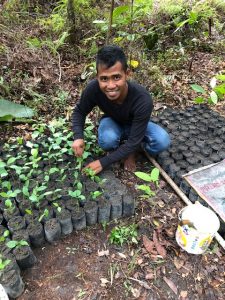 We spent a half day planting trees in Tanjung Puting National Park under the auspices of the Friends of the National Park Foundation (FNPF). The work we did – putting 50 saplings into the ground, potting another 130 seedlings, and prepping a few dozen pots – may not have a major impact. But as Lisa said, it was nice to get Bornean mud under our fingernails. And it gave us a sense of being part of the effort to restore these forests, which have been extensively damaged by palm oil plantations and fires. The loss of so much critical habitat threatens not just primates but many other species that make Borneo the most biodiverse place on the planet. We look forward to taking future measures to help preserve this ecosystem, perhaps helping raise funds to purchase and preserve land. 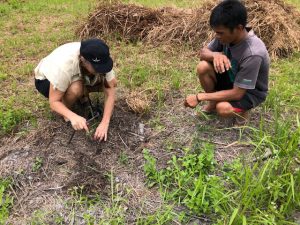 One day we traveled inland to see an FNPF field station where volunteers come stay and work on revegetation in zones surrounding Tanjung Puting proper. Having already spent time planting trees, we yielded to the 90º+ temperatures and settled for just touring the place. Lisa did, however, act as a consultant offering ideas to the center’s director on composting, since they’re trying to start a garden in very poor soil. 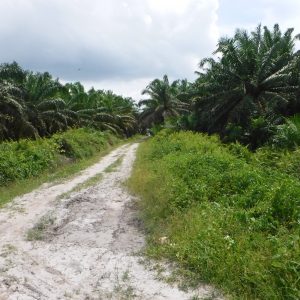 Getting to and from the field station involved traveling by motorbike for dozens of kilometers through palm oil plantations.  They seemed endless, all in neat rows, with some being mulched, some being sprayed with pesticide, and some with their oil-bearing pods being harvested. This exposure made it easy to see the vastness of the damage to the rainforest.

Before leaving Harapan Village we visited the local middle school. It was a Saturday, but because the kids attend six half-days per week (leaving before the hottest part of the day), school was in session. We arrived to find students sweeping, mopping, and tidying up the grounds – and no adults on site! Clearly the kids are not only more punctual than their teachers, but are responsible enough to do chores without supervision. The place was sparse but clean, and being just three years old was in better repair than most of the village,. The kids –all 17 of them – were in neat uniforms and seemed bright and attentive. The English teacher arrived just before class was to start, accepted our gifts of colored paper and pens distractedly, and went to his classroom where students had already taken their seats. 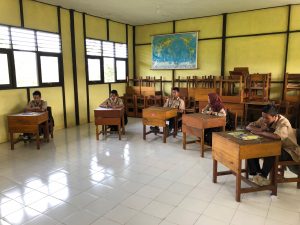 The middle school classroom we visited

The class session, the first portion of which we stayed to observe, began with a sort of a pride credo voiced in unison but without enthusiasm. I thought Lisa and I might be introduced. It was an English class, after all, and we were a rare example of native English speakers in the building. I thought we might get to answer some questions from the students. They were certainly looking at us curiously.  I thought we might at least be acknowledged. Instead, the teacher launched into his lesson as if we were not there. And the lesson? While the teacher was clearly doing his best, the sentences students wrote on the board were grammatically incorrect, and sometimes barely comprehensible. And the teacher’s ‘corrections’ did not appear to render improvement, though they were delivered with authority. 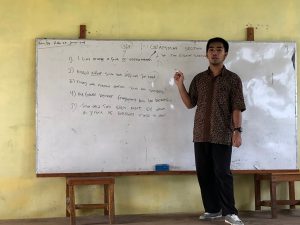 We left saddened but not surprised by this experience. Even allowing generously for cultural differences, there is vast room for improvement of educational experiences in this place (and many others). Anticipating the next phase of our adventure teaching English in Bali helped assuage our sadness somewhat. It’s also worth keeping in mind that school, especially in this village, represents just one of many routes to learning. Case in point: our sharp and knowledgeable guide Adut, whose English was the best in his village, left school at age 12. 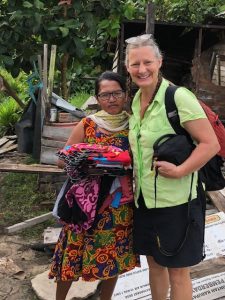 We’d only been five days in Harapan Village, but in leaving the village, our host family, and Adut, we felt a strong sense of separation from this delightful community. But Bali awaits. 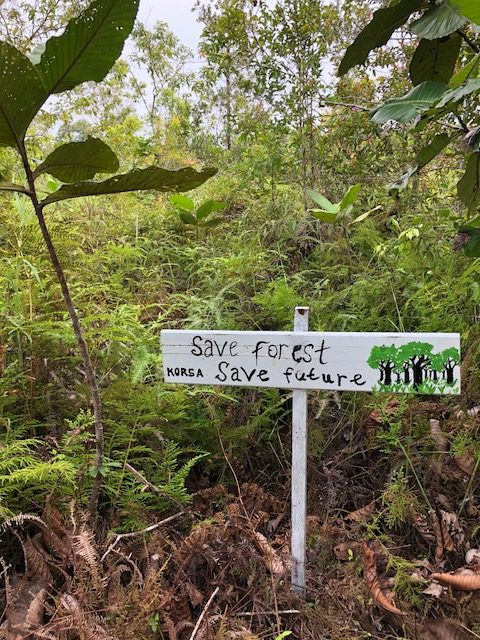