What is it that makes stories so compelling?

When I think about storytelling, the image that first comes to mind is a small group sitting around a fire – eyes alit with the reflection of the flames, souls alive with the magic of the tale. It’s an image of warmth and of community and sharing. The stories thus told were about their lives, their world, their dreams… and who knows, perhaps they included off-color jokes about wildebeest mating habits, too. Whatever those stories were about, sharing around the fire is at the root of human culture, and it is what became what we call literature. 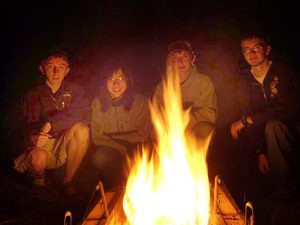 Our species is known for curiosity (a trait found not just in humans, but that’s another essay).   As we generate and share our stories, we are engaging in the process of making meaning. We are embracing the complexity and mystery of the world, creating narratives that place those things in a context that makes them meaningful.

To put the complexity of that sentence into context, let’s look at a story, a story about a storyteller. This storyteller had the rich name of Pramoedya Ananta Toer. Toer was an Indonesian author, a courageous man who spoke out about injustice in his country. By writing compelling stories about issues like government corruption, he was seen as a threat. As a result, Toer was locked up as a political prisoner twice, by two different regimes, twenty years apart.

That didn’t stop him. During his second incarceration of fourteen years on the island of Buru, his jailers refused him writing materials because they knew how powerful his stories could be. Toer was undaunted. He began telling stories to his fellow prisoners in the dark, one chapter each night. The other inmates were rapt listeners, and demanded that he continue. Eventually Toer was released, and once he was able to write them down, these stories became the Buru Quartet, Toer’s famous four-novel series about the liberation of Indonesia.  It’s a great read, by the way.

Toer’s story suggests that stories are part of who we are, and that the power of stories is such that we are compelled to seek and to share them.

I think we all have stories in us. We are indeed compelled to tell each other about our lives. Indeed, linguists have speculated that all human communication is a form of echolocation. We are always expressing some form of: “I’m here, I have concerns and ideas and dreams just like you…” and listening for an empathetic response. 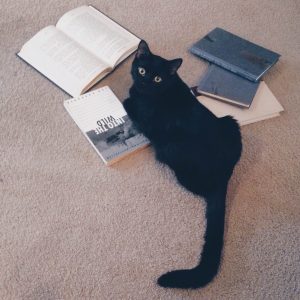 When stories become art is when they are crafted from raw material into something beautiful. The art of the storyteller includes sequencing, timing, use of humor, narrative arc, and other tools. But at its essence the purpose of the story is to engage the listener and create a resonance between the story and the listener’s experience.
Sometimes this means not giving information. Andrew Stanton, the Pixar director known for such gems as Toy Story, A Bug’s Life, and Monsters, Inc., says “It is the organized absence of information that draws us in.” That is, the listener needs to be able to make certain connections herself in order to really become part of the story. This is also what sets excellent storytelling aside from simple narrative: it creates a certain reciprocal magnetism that makes the story come alive.

Why am I rambling on about storytelling, when my primary focus is on education, design, youth, and relationships? Three reasons. For one thing, effective education is very much like storytelling: it relies upon the crafting of raw material into something compelling and interactive.

Second, creating a personal narrative is essential to the ability to manifest change in ones’ life. This warrants further discussion, as it lies at the core of self-determination and purposefulness. 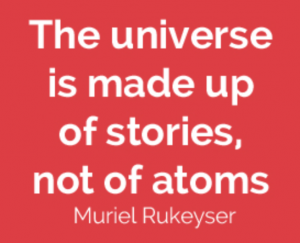 Third, craft is the effective application of design. An avocation that I am spending more time on lately is fiction writing. I’m absorbed by the crafting of a story: What is it that makes a story not just interesting but compelling?

More on this in upcoming essays. For now, I invite you to comment on this post: What do you think makes a story “sing?”